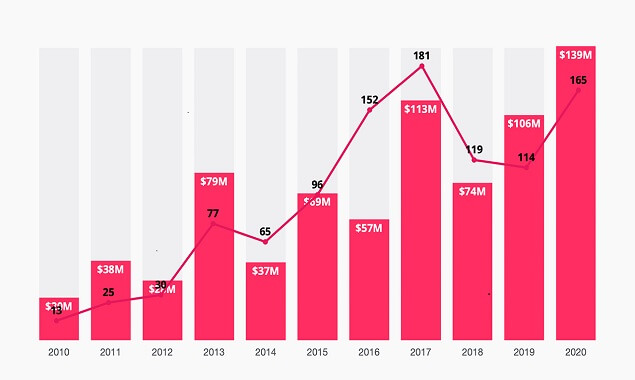 Turkey Startup Ecosystem 2021 that, the fourth one this year, was organized by Startsup.watch. Data on the startup ecosystem for 2020 was shared at the summit.

Shared statistics and predictions are as follows;

Recently, the gaming industry, which has risen with the stories of exit made by gaming startups, has also become a favorite of startups. Both in 2019 and  2020 was too many startups have been established in the gaming industry  in Turkey.

In 2020, startups preferred foreign investors. 78 million dollars of the 139 million dollars investment was made to Turkish enterprises that commercially carried the startups to the abroad.

As can be guessed, Big Investments have been made in global thinking startups. Insider, Meditopia and Getir have had many investment ventures in 2020. The common feature of these three startups was that they were not restricted to the local market and their large fluctuations were made.

While investors mostly invest in SaaS, fintech and health technologies, in terms of amount, SaaS, artificial intelligence and marketing technologies were the areas where most of the investments were made.

In 2020, 10 funds established a total of 270 million dollars. This is described as both units a year in Turkey means that the amount of broken records as well.

Turkey in 2020, as in previous years invested over $ 100 million a year made its place among the countries. It was ranked 18th among all European countries, after Poland. 1. League, Turkey has maintained its position in Europe.

Peak was first unicorn company in Turkey when was Purchased by Zynga. At the same time, Peak achieved the title of the biggest venture in Europe to exit in 2020, supported by venture capital.

Turkish entrepreneurs abroad get  total investment of 385 million dollars in 2020. As 38 startups in total get investments, Carbon Health, Gorillas and Streetbees were the most invested.