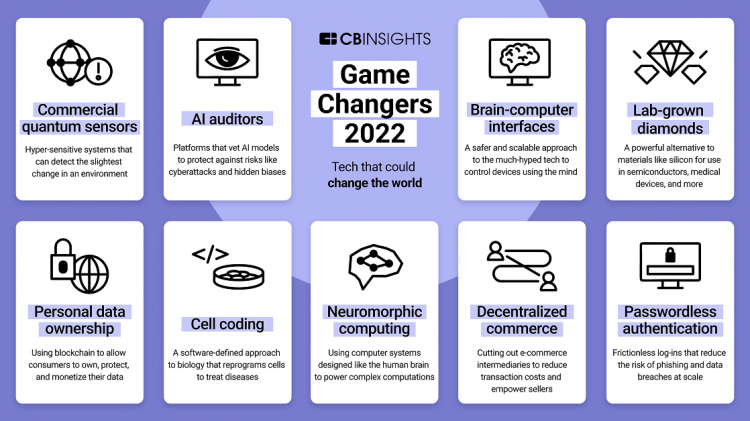 CB Insight’s “Game Changers 2022” report highlights 9 emerging technologies that have the potential to change the world over the next 10 to 20 years.

Some, like brain-computer interfaces and cell coding, could lead to breakthroughs in how we treat disease.

Personal data ownership and decentralized commerce aim to put power back in the hands of consumers and sellers, while AI auditors and passwordless authentication protect against cyberattacks, data breaches, and hidden biases.

Here are the 9 tech trends;

Commercial quantum sensors: Quantum sensors can detect even the slightest change in the environment. These devices are being built for a wide array of applications — including underground mapping and medical imaging — and can be smaller, cheaper, and thousands of times more precise than conventional rivals.

AI auditors: AI systems, especially those powered by machine learning (ML), are vulnerable to bias and data poisoning (an attack that tampers with a model’s training data). With more than 55% of global companies using AI, these threats can have massive consequences across sectors. To mitigate these risks, startups are integrating software into AI systems to audit and amend problems in the data.

Brain-computer interfaces:  Brain-computer interface (BCI) systems can detect and quantify brain signals and translate them into device commands to accomplish a user’s intent — such as typing out words or moving a robotic arm. Historically, implanting a BCI has been an invasive, open-brain procedure. However, emerging, minimally invasive solutions, such as those from Synchron, may be less risky for patients. Further, many surgeons could already have the knowledge to perform the procedure (which is similar to a common stent insertion), making it more scalable.

Lab-grown diamonds: Using a process called chemical vapor deposition (CVD), diamonds are grown in a reactor layer by layer. These can replace materials like silicon, gallium nitride, and fused silica across a vast range of technology applications from semiconductors and radiation detectors to laser optics and telecom devices that are otherwise impossible with natural stones.

Cell Coding: Advances in computational biology and bioinformatics are improving the cost and scalability of producing human cells for research and cell therapies. New cell reprogramming technologies are enabling cells to be grown faster and more efficiently than previous methods.

Neuromorphic Computing: Inspired by the structure and processes of the brain, neuromorphic computers are composed of artificial “neurons” and “synapses” that handle information in a completely different way to the Von Neumann architecture used in most computers today.

Decentralized Commerce: Merchants can tokenize physical products and services as non-fungible tokens (NFTs) — allowing buyers to receive a digital representation that they can then resell or redeem for the physical asset. By transacting on the blockchain, the two parties bypass centralized e-commerce platforms that traditionally take a cut, while preserving transparency and authenticity.

Passwordless Authentication: Over 60% of data breaches can be attributed to weak or reused passwords, and the average data breach costs over $4M. Invisible multifactor authentication (MFA) improves upon current MFA with automated, seamless authentication that could spur mass adoption of passwordless identity verification — a vital step toward preventing cyberattacks.

You can check the report and see which startups are operating under these areas.