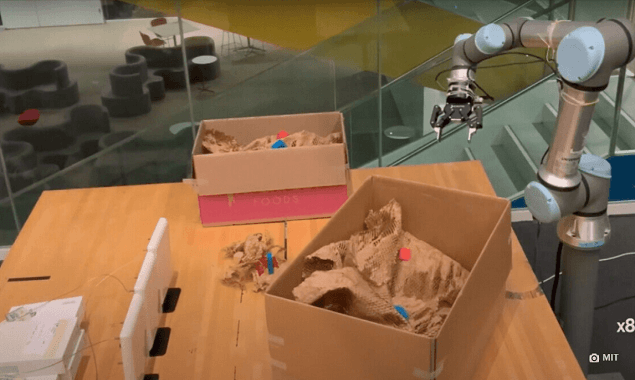 MIT researchers have developed a robot that can detect and grab objects that are hidden behind walls or pieces of clutter.

The system, called RF-Grasp, uses radio waves to locate items beyond the line-of-sight of a robot’s cameras. It could help warehouse robots grab customer orders or tools that are occluded behind obstacles.

Existing mechanical search systems struggle with these tasks due to the constraints of their sensors. If an object is concealed, they typically need to explore the environment and search for the item.

RF-Grasp is comprised of a camera on the robot’s wrist and a separate RF reader. Together, they collect tracking data and create a visual map of the environment.

The system first pings the object’s RF tag to identify its location. It then determines the optimal path around the obstacles to reach the item.

As the robot gets closer to the object and starts manipulating it, computer vision provides more precise directions.

In tests, RF-Grasp successfully identified and moved objects that were concealed behind packaging and other obstacles. The researchers say the system completed the tasks with about half as much movement as similar robots equipped with only a camera.

The system does depend on target objects being tagged with RFIDs. But the widespread adoption of these chips as barcode replacements in retail, manufacturing, and warehousing means RF-Grasp could already have a practical impact.