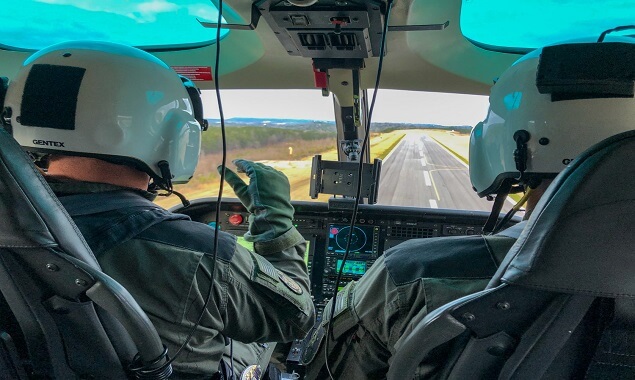 Aviation has a problem that has vexed the industry for decades: when pilots unintentionally fly into clouds, lose control and crash.

From the dawn of aviation until now, it’s caused thousands of accidents. It happens to student pilots and some of the most experienced aviators.
Just in the last month, that’s believed to be what happened in two fatal National Guard helicopter crashes in Idaho and New York that killed six people. And, last week, the National Transportation Safety Board determined that’s why a helicopter crashed in 2020, killing basketball star Kobe Bryant and eight others.

“In this situation, this weather did not sneak up on the pilot very quickly,” said NTSB lead investigator Bill English about the Bryant crash. “Good people can make a bad decision and we really want to get at the bottom of why.”

The pilot of that flight pressed on even as the weather in southern California worsened. He kept talking to air traffic controllers and bypassing airports where he could have landed. Eventually he flew into clouds and lost control. NTSB Vice Chairman Bruce Landsberg was blunt during the hearing: “We pretty much know what happened. We have a very good idea of why it happened. And we absolutely know how to prevent these kinds of crashes.”

This new virtual reality technology is hoped to prevent that in the future – by making pilots aware of how dangerous it can be to press on and put them in situations that mimic flying in challenging weather.
The technology was created by a company called AT Systems. President Tyson Phillips said the premise is quite simple. “I want to scare the pilot. I want you to understand that you do not want to be in these conditions in the real world. I want to scare you to make a better decision.”
For the past year, the Army has tested this virtual reality system on its ground simulators and, in the next month, is scheduled to fly it in actual conditions.

The virtual reality system can be programmed for all sorts of weather scenarios and even replicate previous accidents.
Tony Kern who is CEO of Convergent Performance said that When technology makes it easier for us, we get mentally lazy and that’s not on the engineers. That’s on us as professional aviators.

Back on the ground, after the hour-long training flight, pilot Jonathan Johnson liked what he saw, saying it was very realistic. “We think sometimes that we’re invincible and that we can push into it. And then if you’re not prepared and not trained up for it, it can be fatal.”
Once a pilot mistakenly enters the clouds it doesn’t take long for problems to crop up. The U.S. Helicopter Safety Team says a pilot who enters clouds by mistake will likely lose control and crash within 56 seconds. That’s what happened in the Kobe Bryant crash and it’s why training in real-world scenarios is so important to cut down on the accident rate.